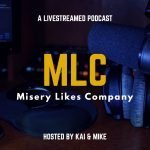 Misery Likes Company Livestream
Episode 01 - I'm Back But Now Me Is WE!

This is the official livestream, co-hosted reboot of the podcast! I’m now joined by my co-host Mike (aka GrooveDude) in studio in Las Vegas every monday at 9pm (-8 GMT).

In tonight’s episode we chat with a fellow Las Vegas resident about privacy and technology, including a Samsung issue affecting tablets and phones involving Chinese spyware, we speak with a Georgia resident about a variety of topics from political & economic theory to everyday things, we also get a couple of callers in from India with opinions and views on the situation concerning India’s law change that is an attempt at dividing the nation based on religious lines. It’s a wide and diverse set of topics and callers in this inaugural episode of Misery Likes Company Series 2.

You can find the various links mentioned in the show below: